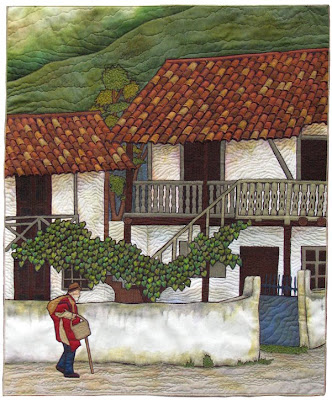 Here is the Baños quilt finished. There are many things I like about it, some I don't. I took a lot of liberties with the original photograph, leaving out a lot of details that were distracting and moving things (like the gate) to improve the composition. I also added the figure of the man passing by. He was not in the original photo, but in another photo. I simplified the background considerably. All this was fine. When I am working from a photo I feel no obligation to copy it exactly. It is simply a starting point. What I am not entirely happy about is that I seem to have "prettified" the old house more than I intended. One thing I especially like is the quilting on the foreground pathway.

I have been thinking a lot about  clichés, by which I mean subject matter that has been done so often it loses meaning and impact. There are a lot of them. I have joked with my friends that there should be a moritorium on heron quilts. (Do a google image search on "Heron quilt" and you will see what I mean)  Vine covered cottages, as the Baños quilt certainly is—another cliché. Thomas Kinkade has made a fortune on them. So, probably, are depictions of indigenous people in foreign locations. The thing about a cliché is, that it gets to become so popular because it is an image with great appeal. Me, I'm tired of so many heron quilts, but I can't resist snapping a picture when I see one standing among the cattails at the edge of a pond! So, the challenge for an artist, in my opinion, is not necessarily to avoid those oh-so-popular subjects, but to make them your own and offer a different approach to an old familiar subject. I had a discussion about this recently with a friend. I told her I was thinking about making a piece using a subject she has used frequently and referred to it as a cliché subject. I think I offended her and she thought I was saying her work was banal. Actually, I think her take on the subject is pretty interesting and I am trying to come at it in a different way—hopefully equally interesting, but quite different.

So, back to the Baños quilt. As always, I have been looking at it too long and have lost perspective. I am tired of seeing it and I know it will look different to me when I come back to it in a couple of months. But right now it strikes me as a bit of a cliché.
Posted by Terry Grant at 12:19 PM