This is an old bottle of Coke that has been in my china cupboard for at least 25 years. It still has the original Coke inside. I imagine it is pretty flat by now, but that's OK because I don't intend to open it. I got it at the time that the small, 8 oz. bottles were being phased out. You see them again now as kind of a nostalgic novelty, but you couldn't get them for a long time. In my opinion it is just about exactly the right amount of Coke to drink, but what do I know? Coke in a bottle tastes different than Coke in a can and you can finish an 8 oz bottle before it starts to get warm. Ice cold is the only way to drink it—right?
I can't tell you how many bottles like this I have consumed in my lifetime, though I haven't drunk it on a regular basis for many, many years. When Ray and I were first married we lived in an apartment at the Pocatello, Idaho YWCA and were the caretakers for the building. There was a Coke machine in the kitchen that dispensed bottles like this. We were regular customers. 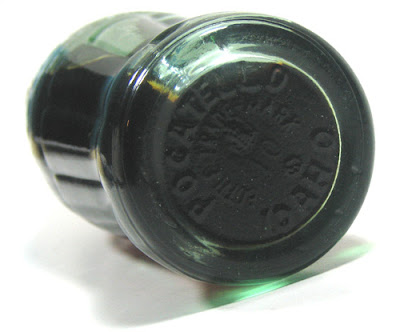 The reason I kept this particular bottle was nostalgia and for the molded printing on the bottom of the bottle. Can you read it? It says "Pocatello, Idaho". The bottles used to have the name of the city where they originated on the bottoms of the bottles. Of course the bottles were reused and they traveled so it was not unusual to buy a bottle in Pocatello that read "Casper, Wyoming" or "Albuquerque New Mexico" on the bottom. I always checked to see where the bottles were from. When I was a child my Dad, who had an engineering business in Pocatello, did work for the local Coca Cola bottling plant and became friendly with the manager of the plant, a jolly man named George Chaffee.  George took great pride in his product and my mother, a connoisseur of Coca Cola, always declared that Pocatello Coke was the best—the perfect amount of carbonation. If we traveled to Salt Lake City or Boise, and Mom had a Coke she'd say, "not as good as George's." George said he took great care to filter the water so there were no minerals to change the flavor. On Christmas George would drive around town in a shiny red Coca Cola truck and deliver a bright yellow, wooden case of Coke to each of his friends and business associates. We were lucky enough to be in that group. I looked forward to George's Christmas visit almost as much as Santa Claus. He gave my sister and brother and me lots of little Coca Cola trinkets over the years—key chains and toy trucks and little bottles of Coke that were perfectly doll sized. Most of them were lost, as such stuff tends to end up, but I saved one little bottle of many. It is in the china cabinet with its big brother. 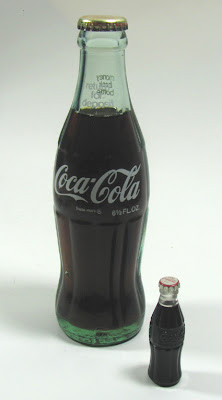