I am getting ready to start making a new piece based on a photograph that I took back in 2003 in the Ecuadorean city of Baños. Baños, in Spanish, means baths and it is the natural hot springs in Baños that make it a tourist attraction. That, and the beautiful scenery. I should mention that this is Baños de Ambato. There is another Baños in Ecuador. 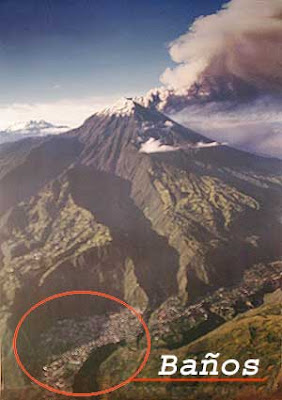 That is Baños tucked into that valley in the shadow of the volcano Tungurahua, which is actually erupting right now. It erupts every few years and sometimes gets fierce enough that the villages in its wake, including Baños, are evacuated. You can see how vulnerable the city is and how difficult it would be to escape in the event of a major eruption.  I'm sure the hot springs are related to the proximity of an active volcano.

We had a wonderful time in Baños. We were traveling with Ray's brother and his wife and on a rainy day we took an excursion bus, called a Chiva, on a trip up a canyon that featured one amazing waterfall after another. It was incredible and fairy tale-like in the mist and rain. 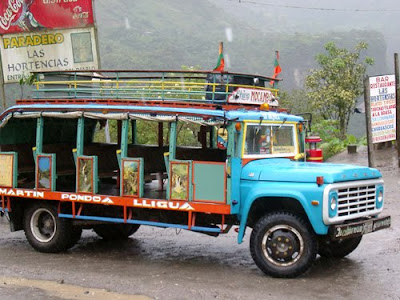 We stopped at a spot where you could pay a couple dollars to ride in a little box on a cable across the canyon. Ray and my sister-in-law and Emily jumped at the chance. Roy and I opted out and stayed behind to take pictures. 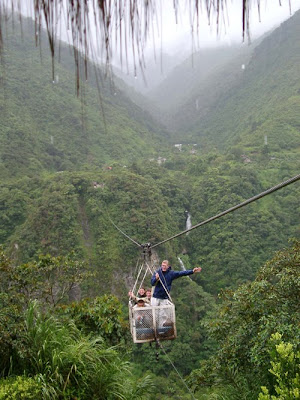 While we waited, we had a soft drink at a little shack there and I took this photo. It is one of my favorite photos ever! Something about the Coca Cola and those brilliantly colored local sodas just so reminds me of the everyday street life in Ecuador. You can't believe how much soda they drink down there. I always found "Inca Kola" rather amusing—as if it were the official, historical drink of the Incas! 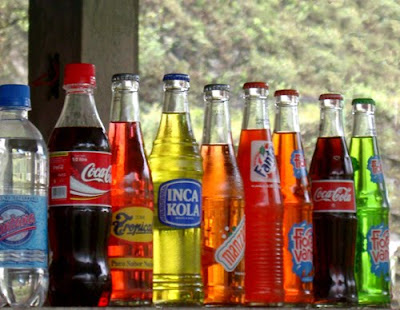 As we were leaving Baños I took a photo of a very decrepit little old house I had been noticing and thought it might be the inspiration for a piece of artwork. Looking at the photo years later, it is hard to remember exactly why I was so taken with this particular house. It had something to do with its graphic lines and that exuberant vine growing all along the stair rails. It looks pretty sad in the photo, but there was something about it that spoke to me. I am finally thinking of seeing what I can do with it and if I can capture some of the charm I originally saw. 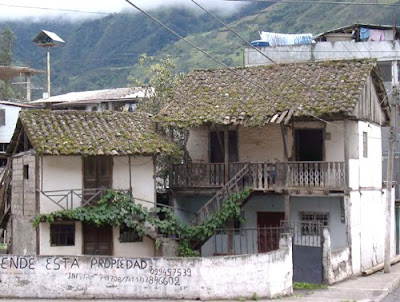