Having been a sewer for years and years, I have had a variety of pincushions, including several of the classic red tomatoes. I once made myself a pincushion in a sake cup, which finally fell off the table and broke. I have needlepointed a pincushion and had one of those magnetic pincushions. Pincushions get ratty after awhile, except for the magnetic ones, but I just didn't like reaching into that mass of  poke-y pins.

My bad habit is that I end up sticking needles into my pincushions. The ones that have no thread quickly disappear into the innards of the pincushion. The ones that have thread make a big mess with the thread tangling through the pins and other threads. Most pincushions are, in my opinion, too small. I've been wanting a nice big, flattish pincushion that won't roll like tomatoes and sake cups do. 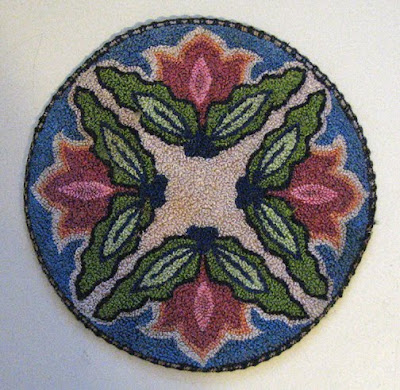 The other day I ran across this piece of needlework I had tucked away. It was something I found among my mother-in-laws things after she died. I don't think she made it. Perhaps it was a souvenir of a trip she took or just something that was given to her. I'm not sure of its purpose. Maybe kind of a doily. It is a punched kind of needlework that creates a surface that is somewhat like chenille. I liked the stylized tulip design and thought it might be the beginning of a new pincushion. I stitched a back on it, leaving an opening and stuffed it with little plastic pellets made for adding weight to dolls' feet and bottoms. They are about the size of rice, which I have also used to stuff pincushions in the past. It came out a little misshapen and too round, so I stitched a cord in the center that pulled the middle together a bit and flattened it. I worked the stuffing around to fill it out. The cord makes a loop that I can pick it up by. 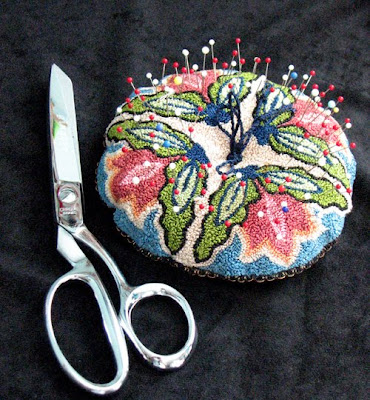 I went through my pins and discarded all the bent and dull pins. You just have to do that every so often. I like nice sharp, long, glass headed pins. Those little short pins with the tiny, flat heads are worthless. I throw them away. I'm going to try to keep needles in the magnetic holder and I have thrown away my raggedy old pincushion.
I am loving our summer weather and I took my new pincushion out on the deck this morning and stitched a sleeve on the back of my newest quilt and trimmed off all the loose threads on the back. 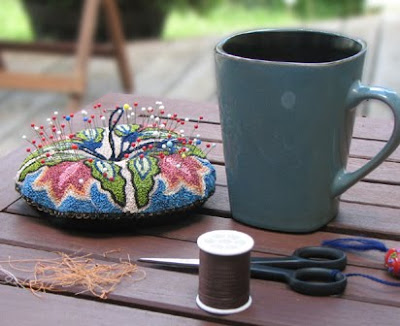 Now, that is a useful pincushion.
Posted by Terry Grant at 4:34 PM