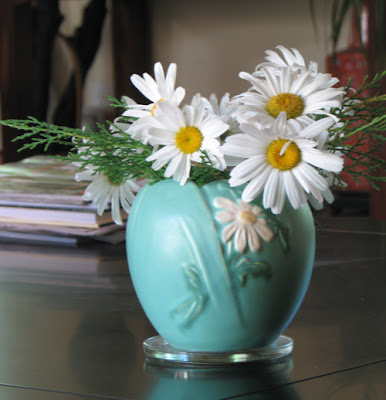 There was a time when I would have looked at a vase like this one and thought it a frumpy, ugly little thing. You might even agree, but I have come to an appreciation of pieces like this that is partly sentimental and partly aesthetic. It reminds me of my childhood. Not that we ever had anything like this in the house where I grew up. My parents' tastes ran to Scandinavian and modern design, as well as Asian design. This vase was the sort of piece seen in "old" people's homes. You would see this in homes with dark wood and scratchy, overstuffed furniture, festooned with crocheted doilies. Musty, dingy, old-fashioned, I thought, and thus, for me, undesirable. Our house was decorated with light colors and sleek furniture that floated on slender legs. Not a doily in sight, nor anything patterned with flowers. It was much later in my life that I learned to love a broader spectrum of style and design.

This is a vase made by Weller pottery, part of a style of pottery from the late 19th and early 20th century known as "art pottery." It is now collectible, but I think it was quite affordable in its day. This vase was a gift from someone who did not know me well, had never been in my home, but was a token of appreciation for some work I had done. I would never have bought this for myself. Probably never have really noticed it in an antique store. How, or why did she think it was something I would like? I don't know, but, paradoxically I do like it. Quite a lot. Of course, there is that soft, matte glaze—such a perfectly, perfect color. And the shape and size are just right for a small bunch of flowers. The daisy on the side is sweetly kitschy and maybe putting real daisies in it is just a little redundant, but it pleases me immensely.

Sometimes I don't even know what I want until someone gives it to me.
Posted by Terry Grant at 7:00 AM