The problem at hand 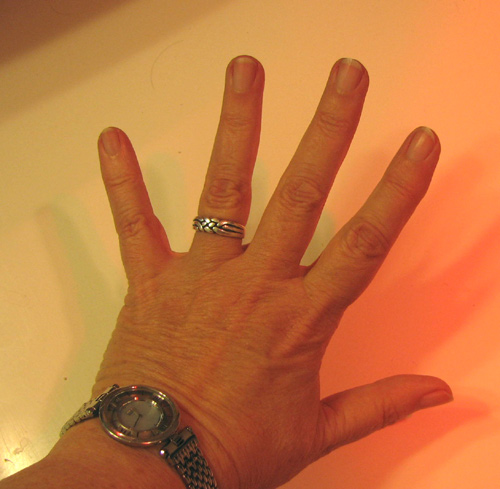 For years I have had problem fingernails. They split in a variety of ways. Layers would peel off, sort of like laminate separating. Then little horizontal splits would start at the corners so that as the fingernail grew out, there would be a little snaggy place that would catch and further split the nail. I tried a lot of things. I tried super glue (really) with limited success. I tried mixing unflavored gelatin in juice and drinking it—a touted treatment for creating harder nails. That doesn't work. I tried all kinds of products made to apply to one's nails to harden and strengthen them and nothing helped. This was not a vanity issue. It was painful and aggravating.

Then about 10 years ago something happened that took my nail problems to a new level. We were in a car accident. I was driving and we were hit by another car. The air bags deployed and slammed into my hands and arms. I was bruised and sore and both of my thumbnails were split vertically down the center. Ouch. The really distressing part was that as the nails grew out they just continued to split vertically. I bought products that covered the split nails with fibrous paper and glue. I covered that with nail polish. I had been using nail polish for years believing that it made my nails stronger. Finally I started really researching split nail problems online.There are a gazillion theories and remedies, but most of the medical sites I found attributed the problems to a combination of two things—dryness and fingernail polish remover. I quit using polish and therefore the remover, cut my nails very short and started using hand creams and lotions more regularly. They were better, but still dry and brittle. I decided I needed a more aggressive moisturizer and tried a lot of things, including olive oil and special nail creams. I finally remembered a little tin of Bag Balm that I had purchased in a quilt shop, oddly enough, advertised for dry skin even though the product is intended for moisturizing cows' udders. It was the only thing that really seemed to help. I could tell that they were less dry and brittle immediately and over several months the vertical splits finally stopped and when the nails finally grew beyond the splits, they were gone and have never come back. 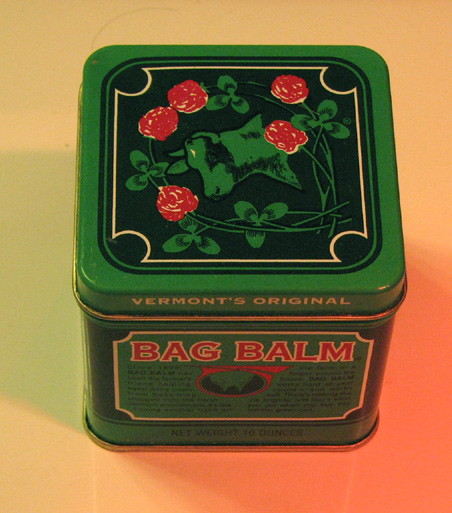 I apply it liberally to each nail before I go to bed at night. It is very greasy and gooey and it doesn't smell very nice either. You might suppose that it would be messy and get on my clothes and bedding, but it seems to absorb very quickly. If I keep to this ritual my nails stay strong and free from splitting and peeling. This week I have noticed that my nails are brittle and breaking and a little shreddy as I file them, but not split. I need to be more diligent in this cold, dry weather.

I am happy to have worked this out, but I still wonder if there is something else that would work as well. I have friends with similar nail woes who have given up and have acrylic nails. Ugh. Yuck. That is not for me, but if you know of other effective ways of maintaining strong, healthy fingernails I'd love to hear it.

Now I have shared with you my number one beauty secret—stinky, greasy cow unguent. Pretty glamorous, eh?
Posted by Terry Grant at 11:52 PM