Deadlines are looming. I am writing another magazine article and I have a little more than a month to make a large quilt and, darn it, life keeps getting in the way! Both of my grandchildren are sick. When they are sick they can't go to daycare so they come to me. And that is the way I want it to be, by the way. It's just that the timing is bad. Poor little babes—I think this is illness #3 for each since Christmas. They have bad colds right now and lots of chest congestion. The baby is pathetic. I spend a lot of time just holding him. Thankfully, they are getting better and I am getting a little more work done. 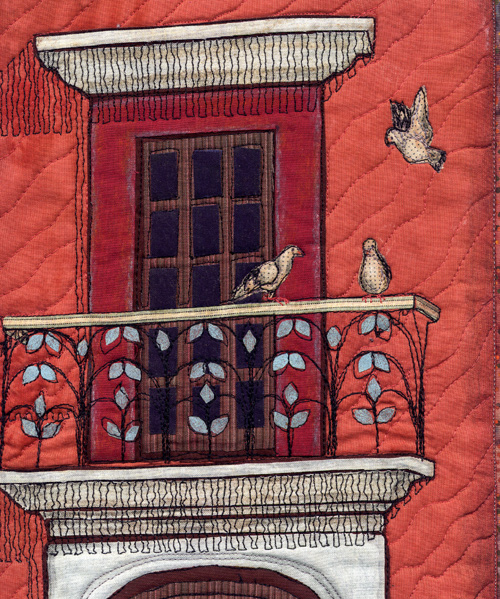 Here is a little section of a small piece I have been working on. I'll show the whole thing eventually, but not yet. This is part of scene based on a photo I took in Mexico several years ago. I loved the architecture and the colors, especially in Oaxaca. I had nearly finished it today and it seemed somehow not quite finished. I decided it needed something alive in it and added the pigeons. They are not in the photo I took, but I remembered seeing so many pigeons sitting on balcony railings and rooftops.  Suddenly, with the addition of the pigeons I became very nostalgic about that last trip to Mexico. I could imagine sitting in a courtyard filled with exotic plants and flowers and tossing crumbs to the pigeons. I could picture the clear blue sky and hear the music and feel the sun on my shoulders. That is just exactly where I want to be right now. 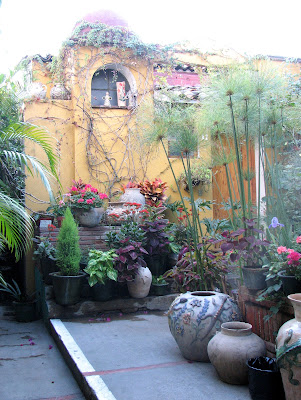 Then I had to laugh at myself. I had improved my piece by putting a bird on it. (Well, three)  Have you seen the new TV show called Portlandia? It is about life in our own fair city and it is very funny—at least to those of us who live here and recognize the locations as well as the cultural references. Anyway, there was a segment called "Put a Bird on it" that made me laugh out loud as well as feel a little self-conscious about all the birds that keep showing up in my artwork. I have actually been in that shop on N. Mississippi Street. I think I bought a beautiful card there once with a, ahem.... bird on it.