I was late getting my Twelve by Twelve quilt posted, but it now up, along with the other 11 "eggplant, burgundy and emerald" pieces. It is an interesting reveal this time. I think a lot of us had a hard time with the colors and several of us gave it more than one attempt. I made two. This was the first one: 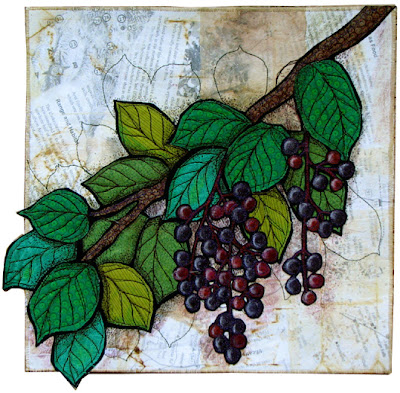 These are chokecherries, which grow wild in southern Idaho where I grew up. My mom made wonderful chokecherry jelly, but what I most loved, was the chokecherry wine my Dad made. It was his best flavor.

The colors were truly challenging. I know I should love all colors and combinations, but I don't love this combination. They are all fairly dark, which seemed to be the major challenge for everyone. I decided a light, but neutral, background would help. I created the background piece by collage-ing some maps of the area where we used to pick chokecherries, with bits of an article about chokecherries and some of my teabag papers. While there are elements of this piece that I like, I was not very happy with it once I finished it. It seemed too "typical" of my usual shtick. Also a little too tidy and prissy. Yesterday, when I got ready to photograph it I decided I just kind of hated it. It didn't make me think of picking chokecherries or their rich, earthy flavor at all. They looked like something in a greenhouse.

Late in the afternoon I started madly cutting leaf shapes from a pile of hastily chosen fabrics, some the same as I had used in the first piece, and by late last night I had finished "Chokecherry 2". 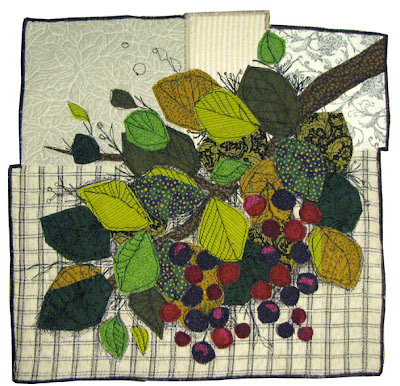 It felt more like what I was trying to do. A little wilder and earthier. A little more energy, I think. So this is the official Twelve by twelve response piece.

I was late in posting today because I ended up taking my baby grandson to the Dr. this morning with my son-in-law. Between their family and me, we have been sick for a month—one thing and then another. Poor Marco probably has a virus, but the Dr. sent us over to the hospital for a chest x-ray and lab tests to be sure he doesn't have a bacterial infection. It took hours and was all quite distressing to the poor, already miserable, baby. He came home with me for awhile so Cayo could get a little sleep. They've had some rough nights this week. I have a broken tooth and was supposed to go into the dentist this afternoon for a crown prep and missed my appointment. It was an hour earlier than I thought. Ugh. I hate days like this. Out of control. Now I think Ray is getting sick. Isn't January just a wasted month? I always feel like the crummy weather just makes everything more difficult. Am I whining? Yeah, I think I am.

On a brighter note, I found out yesterday that my bird-making class scheduled at the Oregon Garden later this month has enough students. I have a small class so far. Room for more! If you are in the area, I'd love to have you join me. Click on the birds at the top of the sidebar for all the information.
Posted by Terry Grant at 3:59 PM