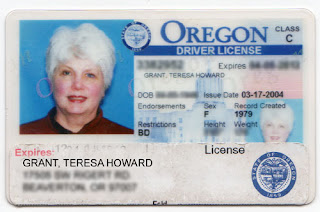 Teresa is my grown-up. Teresa has insurance and a driver's license and a college diploma and a bank account. Terry, on the other hand, has none of those things, but she has friends and a family and generally enjoys life to the fullest, because Teresa takes care of business for her.

Most of the time I am Terry, but yesterday I was Teresa, as evidenced by the name on my hospital bracelet. I spent the better part of the day having, and recovering from, an angiogram, which if you aren't familiar, is a kind of ghoulish and creepy medical procedure. All things considered, it actually wasn't that bad. The anticipation was far worse than the actual procedure. And, the good news is that it established that I am fine.

Things started getting weird about a week and a half ago, when, while sitting and drinking coffee and reading the Sunday paper one morning, I noticed that I could sort of feel/hear my heart beating and it was not a normal heart beating kind of rhythm. By the end of the day I was worried enough to go to the ER, where they reassured me it was probably benign pvcs, but I should see my doctor. My doctor echoed the "probably benign" message, but thought I should see a cardiologist. The cardiologist did a stress test, which I apparently flunked (crazy, wild spiky design on the monitor) and thought I should have an angiogram. So yesterday was the day. Teresa checked in and it was done. None of the bad things like blocked arteries or valve problems, etc. were found. Apparently my heart has just decided to go for a more syncopated, more dance-able rhythm. At least that's what Terry likes to think. Don't worry, I am fine, except for a bruised and tender spot on my thigh.

I didn't sleep too well last night and one of the things I thought about was how everyone at the hospital called me "Teresa" all day because, of course, that is my official name and it appears on all my official ID. Not once did I say, "oh, call me Terry" though that is what I am always called. As a child I was Terry at home and Teresa at school. Perhaps I slip into Teresa mode in situations, like yesterday, when it allows me to separate myself a bit from things that are too serious to contemplate. Teresa handles all that.

But I don't need to contemplate serious things. It's all good. My heart has settled on a catchy one-two-cha,cha,cha kind of cadence for the moment—actually medication is making it less dance-y day by day. Getting old is scary sometimes, but it could be a lot worse...