Thread again, the thick and the thin of it

A commenter asked what kind of thread I use for the black stitching I did on the red umbrellas piece. 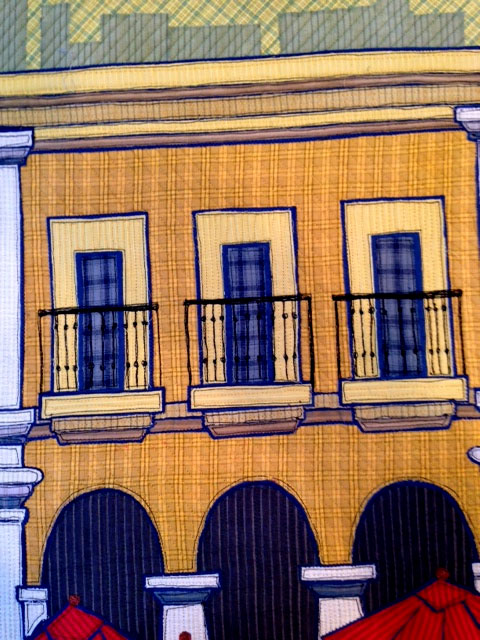 I use Sulky 12 weight cotton thread. It is pretty thick thread for a sewing machine and I need to use a top stitch needle with a large eye for it to work. 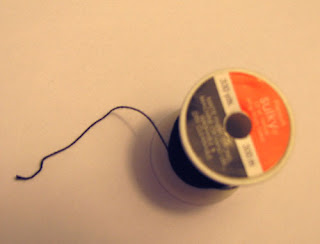 I really like the effect I get with it, but it has been temperamental to use. It is both thick and kind of soft and I have had the experience of having it begin to shred as I'm stitching, so that part of a ply is backing up into a wad behind the needle until it finally breaks. I had a spool with not too much left on it and I decided it might be a good candidate to try out the Sharon Schamber trick of soaking the thread with mineral oil before using it. I did not drop the spool into a container of oil as she describes, but put some mineral oil in a small plastic squeeze bottle and squeezed it up and down over the thread all around the spool.  I was really surprised at how quickly the thread absorbed the oil. It was not at all messy, with no oily feel or residue on anything. And I think it helped. The thread really seemed to flow smoothly through the machine and I had no splitting or breakage.

I got hooked on this thread for the bolder stitching kind of like one gets hooked on drugs. When I went to Cleveland for the taping of the Quilting Arts TV segments several years ago I had some sample pieces that I had done that decorative stitching on using my regular black Star brand thread. There were two very nice ladies there from the Sulky company who were doing a segment for the show too. One of them was looking at my samples in the green room and asked what thread I was using. I told her and she said, "we have a thicker thread that you might really like for this. I'll send you some." Sure enough, a couple weeks later a little box with six spools arrived at my front door. And now I am hooked. There you go. Sad story of a tragic addiction.

Now, my report on the cheap thread I bought from Connecting Threads. Remember this? 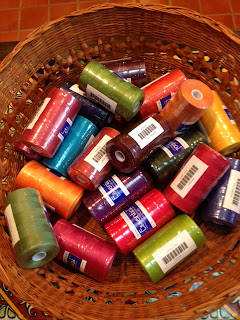 I used it exclusively (except for the aforementioned black top stitching) in the construction and quilting of the red umbrellas. I love it. It sews just beautifully—no slubs, no shredding, no breaking, no tangling. I did not notice any significant amount of lint. I am still thinking that "lint" argument is specious. I notice far less lint in my machine since I have been using so many recycled fabrics, which have been washed enough times to pretty well eliminate their lint. I know that new fabrics are lint-y—some more than others—and I can't imagine that a delicate strand of thread would contribute anywhere near the lint that cotton fabrics do. The thread conversation continued at this month's SAQA meeting and revolved again around the need to use "good" fancy, expensive thread for the safety of both your machine and your work! I did not protest or disagree. Nobody wants to hear it. I really think there is a kind of person who truly believes that the more you spend on your materials and tools and machine the better your work will be. The luxury of nice "stuff" is always agreeable, but it only goes so far. And besides I think this really reasonable thread is really nice! I think I will buy myself a little red sports car with all the money I am saving on thread.
Posted by Terry Grant at 11:47 PM