My cat-loving friends have been concerned about how our old cat, Gracie, would manage the move from our old house to the new one. She's been here about 3 days now and seems to be doing fine. 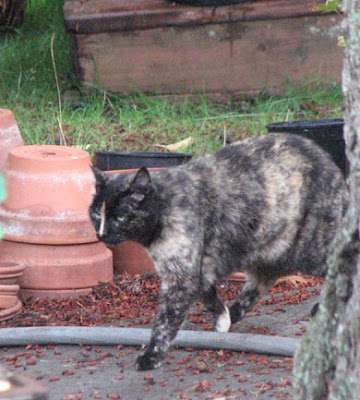 She's old and crotchety, but she's a survivor.

Gracie comes from a disfunctional family situation, so she has learned to get along in the world. When we moved to Portland in 1993, our son Andy and his friend Jason were sharing an apartment in an old courtyard complex on Powell Blvd. here in Portland. Late one night they were awakened by the sounds of a woman screaming. Looking out their upstairs window they saw a couple in the courtyard, engaged in a physical struggle. The young man was beating and kicking his girlfriend. Andy called the police who soon arrived and hauled the guy away. The young woman came to their door to thank them and said she would be leaving to stay with her family for awhile and asked if they could keep her cat for a few days until she could make some arrangements, then she'd come and get her. The cat was quite pregnant and Andy and Jason never saw her owner again. The poor mother cat was so abused and malnourished that she died within days of giving birth to six kittens. Andy and Jason fed the kittens and found homes for three. We agreed to take Gracie and her brother, Oliver. Andy kept the last, pure black male that he named Prozac.

Oliver was sweet and mellow. Gracie was always touchy and crabby. Prozac's disposition was like Oliver and Andy adored him. A few years ago Oliver disappeared for a couple of days, then I found him dead on our doorstep one morning. I believe he got into something poisonous. I was home alone and buried him in the garden, weeping, while Gracie watched. After that Gracie slept on his grave. Prozac got cancer and had to be put to sleep. Andy was heartbroken.

And now it's just Grace. She spends most of her time outdoors. I am allergic to her, so we don't have much physical contact, but we talk every day. She loves Ray, who feeds her. She seems to be adjusting here. Spending a lot of time roaming the property and sleeping out in the grass. She's a little freaked out by the automatic garage door opener—we've never had one before—but I think she'll get used to it. She's figured out her cat door for getting in and out. 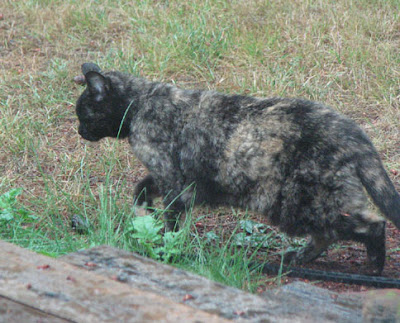