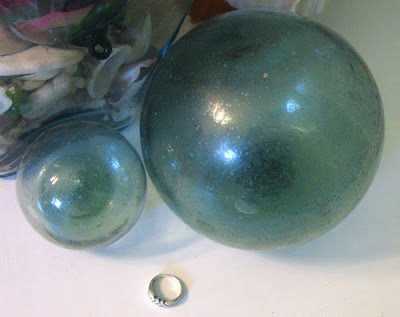 I was a little bit surprised after I posted the pictures of my glass float quilt to read in comments how many people have never heard of or seen these beautiful objects. In the photo above are the two floats that I have. I put my ring in the photo for size comparison. The larger of the two is one my parents had in our bathroom for years. The smaller one is the one I found on the Oregon coast as a child. It has a little water inside, which has always made it all the more interesting to me.

My friend, Ginny, has a house at the beach and emailed me last week to tell me that there was an article in the Cannon Beach Gazette about people recently finding some floats, which have become very, very rare on the coast. She thought it was so coincidental that I had chosen that theme for one of my Oregon pieces and suddenly they were turning up again. It seems there are places in the Pacific where debris gets trapped in a circular wave pattern where it remains for years and years. Only occasionally a strong storm will disrupt the pattern and set some of the stuff free to float on the tides. Apparently this happened this winter and some of it, including a number of floats is washing up on the Oregon beaches again. I was unable to find the Cannon Beach Gazette article online, but found a similar story from the Beach Connection:

"They haven't really been seen in decades – at least in any great numbers. But now they've returned for a little while, dotting Oregon beaches to the delight of many.

Glass Japanese floats were a common sight on Oregon's beaches throughout most of the 20th century, and there’s still bunches of them decorating various beach houses along the coast – especially visible in Rockaway Beach.  Prior to World War II, they almost covered Oregon beaches. But by the 70’s or 80’s, they largely disappeared, as Japan stopped making them for their fishermen and the currents had fewer of them to toss up onto these shores.


They can still be found if you know how and when to look, but they are nowhere near common. In recent weeks, they have all of a sudden returned in larger numbers..."

You can read the rest of the story here.

They really are quite magical. And, in case you missed it, here is my quilted piece. 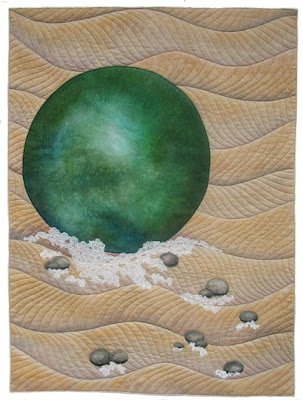