We've had a lovely day here. Got up early and, as Ray says, hit it hard. I started cooking. Ray vacuumed and swept off the porch and walks. We put the leaf in the table and set it for company. We had planned brunch to celebrate Ray's birthday and Mothers' Day. Yesterday I got a call from an old friend. He and his wife were here in Portland for several days. Their 2-and-a-half year-old granddaughter had been life-flighted from So. Oregon to Portland last week for surgery for a serious condition. She is still in the hospital, but doing very well and expected to recover completely. So a good outcome to a scary event. They were able to join us for brunch this morning and we caught up with their lives and family and had a very good time.

Our friend and his wife have been married for a long time now, but at one time, long time ago, he was married to my cousin and part of our family. I felt pretty devastated when he and my cousin split up. We liked him so much and we would miss having him as part of our family celebrations and everyday life. But life moves on and we have stayed in touch, even after we moved to Portland. He remarried. My cousin remarried. And they are both happy and living the lives I believe they were meant to live. 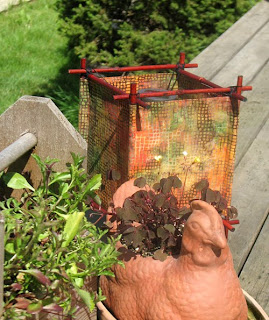 So, lots of family, lovely friends, flowers, funny birthday cards and sweet Mother's Day treats, a big ham, fresh biscuits, orange juice and champagne; good coffee, sunshine and time to enjoy it all, made for a near perfect day. 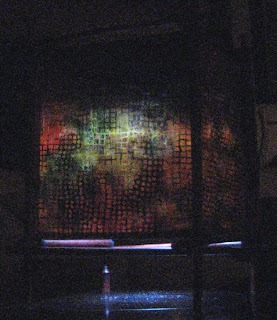 After everyone went home, I finished up my second version of the solar lantern.(Here's the first) This one has slightly longer legs to sit rather than hang. The proportions are a bit different and I used a little heavier bamboo in a beautiful reddish color. I had a comment on the first lantern from a blog friend who felt the bamboo structure was too prominent and suggested I might enclose more of the bamboo inside the fabric. Interesting observation and I considered it, but in the end decided that I like that structural element as part of the design. I did work out the way I connected the pieces, lashing them with black crochet thread, into a neater configuration. I am pleased with that. I left it out on the deck for the afternoon to charge up the solar light, but brought it in this evening when it started to rain. So the night time photo was taken inside and the light was not well charged. Still, I like the glow of the batik colors.

I'm off to bed now. I just stepped outside and there is still a little rain softly falling. The frogs are singing in the darkness and it smells like green and growing things. I think spring is finally here.
Posted by Terry Grant at 12:17 AM