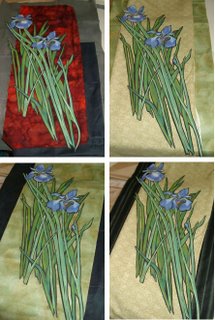 I'm back, and Blogger is letting me post pictures again. I decided I wanted a background for the iris that would be simple—a strip of fabric with a narrower strip of a different fabric down each side. I want the suggestion of an Asian scroll.

I really thought I would like something quite dark for the side pieces so that was what I was thinking. The red hand-dye was certainly dramatic, and it brought to mind van Gogh's irises, but ultimately I felt it was too much and I wanted something more serene. I was surprised that the dark panels were not working for me either and I ended up trying out the two green fabrics together and that is what I settled on. 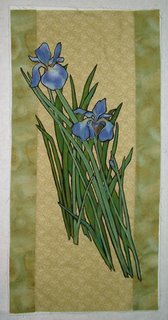 Once I got the irises fused to the background I realized that they were floating, not growing. They needed to be grounded somehow.

This is where I love Photoshop. I can take a picture of a work in progress, put it into Photoshop and try different things without committing them to fabric.

Maybe the irises needed some little dark lines that would indicate the ground they are growing out of. They could be fused, using the same dark brown the irises are fused to, 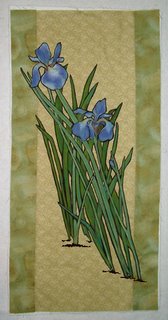 but first I can just draw them in my photo.

Ummmm—no. That's not going to do it.

Maybe I need to get in there with my pastel pencils and put some shadow and color into the background to suggest ground.

Yes! I think this is going to work. But this is still just Photoshop magic.

Tomorrow I will show you how it works out on the real thing. 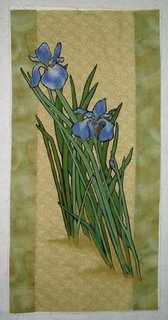