"Let me download a bunch of this extra rain
on your corner of the world and I will
come up with something nice to compensate. . . " 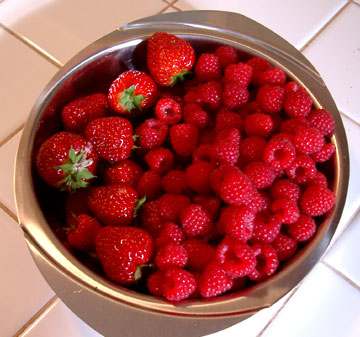 Aside from a few berries that went directly from the bush into my mouth, this is my first "picking" of berries from the garden. Really, is there anything more divine? The bushes are loaded, so this is the first of what looks like an excellent crop.

Last week my friend Beth served our art quilt group a raspberry pie, made from berries from her garden. You may have read Gerrie's raves about the pie the next morning. It had a layer of cream cheese on the bottom and whipped cream on the top and luscious, glazed berries in the middle. Oh—My—Goodness! She has promised me the recipe so I am freezing raspberries to make a pie when my daughter and son-in-law arrive next month.

You can read about the nice day I had last Thursday on June's blog. These outings with Gerrie and June are such a good break. So nice to spend time with smart, interesting people. And as June put it, "gaze and graze".

Just as I was going to sleep last night I heard a loud thump downstairs somewhere. It woke me right up. Ray is out of town, so I was alone in the house. I crept down the hall in the dark and listened at the top of the stairs and heard a few more thumps. I crept further down the stairs and could hear someone moving around below me, so I determined the sound was coming from the basement. I stopped at the door to the basement and listened, pretty sure by now that it was an animal and not a human, but far bigger than our cat, Gracie. Just then I heard a metallic crash and something bouncing down the stairs to the basement. I banged hard on the door several times and heard something scurrying frantically, then I slowly opened the door and flipped on the light just in time to see a raccoon's tail exiting through the basement cat door. It had managed to knock down a large tin that we keep dry catfood in on a shelf at the top of the stairs. It bounced all the way down, then the top popped off as it hit the concrete floor and scattered dry catfood across the floor. I closed the cat door and left the mess to be cleaned up this morning.

It took me a long time to get back to sleep.

Regarding yesterday's trivia question—Anonymous correctly identified Bela Fleck as "an awesome banjo player". "Awesome" is a good word for him. It is banjo playing like you've never heard—jazz banjo—which, I know, sounds like a particularly heinous oxymoron, but it is, in fact, awesome.