Of course I think about my father as Father's Day approaches, but really, I think about him a lot regardless of the day. To be fair, after writing so much about my mother on mother's day, I should post a picture to show you how handsome he was (and he was!) and tell you how smart and clever he was (and he was certainly that) and tell you how very much I miss him (every day), but given the sadness we are feeling right now with the loss of another parent, I don't think I can bear to write yet another entry that will result in my sitting here and weeping all over my keyboard. So, for father's day, just a nice little story about my Dad.

Once when I was in grade school I came home with a straight-A report card. It was a very big deal for me and my parents were both properly congratulatory and full of praise, but for me that was not enough. I told them that my friend, DeeAnn's parents paid her a dollar for every A she got and offered an additional $5 bonus for straight-A s. That made a straight-A report card worth well over $10—a veritable fortune. My Dad pondered this and said he thought grades were their own reward, as evidence of hard work and accomplishment—things that had a value far beyond mere money—and he disliked the idea of attaching monetary value to them. But, he conceded, straight-A's might be something extra special, so he was willing to reward one dollar to any of his children who brought home a straight A report card. We collected our token dollars from time to time over the years and I came to appreciate his point of view. 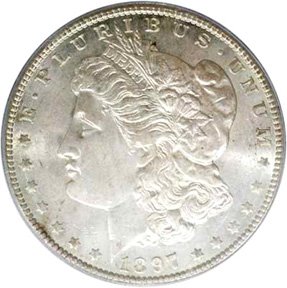 After I had graduated from college and after I was married, I went back to college for a semester to get classes needed for a teaching certificate. When I saw my parents after the end of the term, I said to my Dad, "Hey, I got straight A s. I think you owe me a dollar!" I was joshing him a little. He seemed to think for a minute, then got a big grin and disappeared back into his bedroom for several minutes. He returned, with this coin from his hidden stash, which he, delightedly, placed in my hand. It is an 1897 U.S. silver dollar. It is really quite beautiful and certainly worth much more than a dollar. To me it's priceless, and, in retrospect, I realize it had nothing to do with my grades and everything to do with how much pleasure he took in that spontaneous opportunity to do something surprising and generous for someone he loved.
Posted by Terry Grant at 9:13 AM