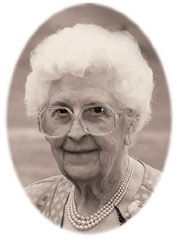 She grew up singing and joking in a closeknit family of 7 siblings, among them some of the naturally funniest people I've ever known. She was pretty and smart, with piercing brown eyes and a ready smile. Her first husband, who must have been a fine person for her to have chosen him, was killed in France in WWII, leaving her a widow before she was thirty. After the war ended she met Larry Grant, who had spent the war years as a prisoner of war in Japan. In each other they found their second chances. They married and raised three boys.

When I married her son Ray, she welcomed me as the daughter she'd never had.

Larry died suddenly and for the second time she found herself a widow at a relatively young age. It was a terrible blow, but even in her grief she found grit and determination, and she emerged as an independent woman, learning to drive for the first time, taking college classes, volunteering and traveling the world. She doted on her grandchildren and she loved us all without condition and without judgement.

Last week the staff at the facility where she lived said she seemed more quiet and withdrawn than usual, even a little angry at times. Her Alzheimers sometimes triggered frustration and uncharacteristic anger. But on Tuesday morning she had a good breakfast and went for her weekly appointment with the hairdresser, a ritual in which she took great pleasure. As her hair was being washed she gasped a couple times then went limp and, just that quickly, she was gone. If you believe in Karma, it was the swift, peaceful death she had earned with a good and happy life that overcame tragedy and loss. She would have been 93 next week.

As we cleared out her apartment this week I could almost hear her singing in her sweet, warbly old lady's voice. Her sons remember her singing along with the radio as she did housework and dishes. She sang silly songs for her grandchildren. Several months ago we were driving her to visit her sister and she was watching the crows fluttering along the roadside. Out of her foggy memory, a song emerged, in its entirety, and she sang out joyfully,

"Pack up all my cares and woe,
Here I go,
Singing low,
Bye, bye blackbird.
Where somebody waits for me,
Sugar's sweet
So is she,
Bye, bye blackbird
No one here can love or understand me
Oh what hard luck stories they all hand me
Make my bed and light the light
I'll arrive late tonight
Blackbird, bye bye"
I'll miss her. My one-of-a-kind mother-in-law, Bertha Grant.
Posted by Terry Grant at 12:09 AM