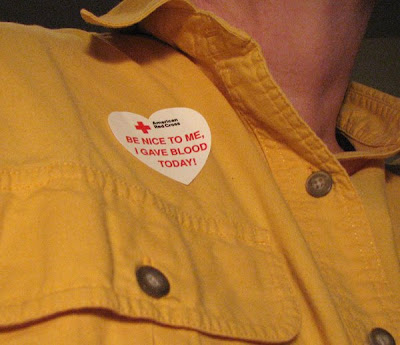 When you donate blood they always slap this little sticker on you when you leave. I leave it there so that Ray will be nice to me. (ha!) As I've thought about it, it is probably there so that if you leave the bloodbank and faint on the sidewalk or in a store, someone will see that you have just given blood and respond accordingly. However that may be—

I have been giving blood pretty regularly for about 6 years now. Many years ago I gave blood several times and each time got dizzy and hot and felt icky, so I quit doing it. Six years ago I decided to try again and found that if I drink plenty of water beforehand I don't have that reaction. So I go. Because I can.

I read the long list of requirements for blood donation, because they make you read it each time, regardless of how many times you have donated. Then, as I wait for my name to be called I have a brief moment of panic, thinking about the large needle, and consider just quietly getting up and walking out the door, but I don't. I pick up a magazine from the display and take it into the donation area to distract myself. I like to find a New Yorker, which I don't often see and always has something good to read in it. I discovered awhile ago that if you start reading a New Yorker story, and don't finish it, you can always find it online later. Today I started reading this story and just finished it online this evening. It was an odd story, but I was attracted to the illustration.

The phlebotomist that took my blood today told me that before I came in this morning, she had taken blood from an 85 year-old man who told her that this would complete 20 gallons of blood he had donated and with that he was quitting. He told her that he regretted not having gone into a profession that helped people and that is why he started donating blood. He said he wished late in his life that he had become a policeman or firefighter and could have saved peoples' lives. She said he had probably saved many more lives with his blood donations than any single firefighter ever had. I liked that story. I was glad I hadn't walked out when I had the chance.