Winter is back—at some elevations

Crazy. I have been shuffling back and forth between the computer and the kitchen all morning and for a couple hours have seen flashing police lights out on the road. Lots of cars are turning around in my driveway. We've had a bit of snow overnight, but it's melting and not a big deal. 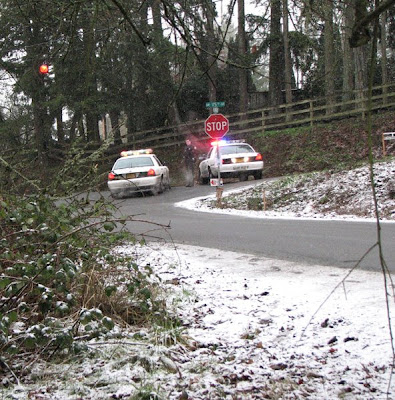 Right out front of my house there's a county sanding truck stopped and a couple of guys putting chains on it. 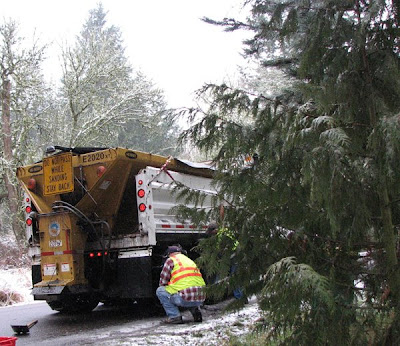 "What's going on?", I ask, nodding toward the police cars. "They've closed 175th (the road that goes up the hill). Buncha' cars off in the ditch up there."

Then it registers that they are putting chains on this sanding truck, headed up the hill the other direction, so I step out into the street to see where they are going. 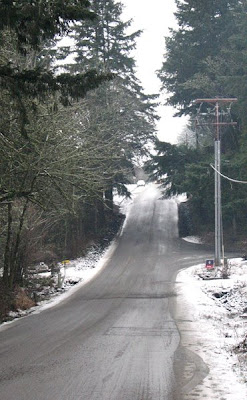 While everything is wet and melt-y right here at my house, just up yonder it is snowy and icy. (It looked like this a couple of months ago) I never realized that such a small change in elevation makes such a difference. Not that the elevation is very impressive. There's a sign at the top of that hill that says "elevation 500 feet". Our relatives from Montana, last summer, laughed and thought it was a joke.

So, that's what passes for excitement at my house this morning. Meanwhile the birds are busy at our bird buffet. 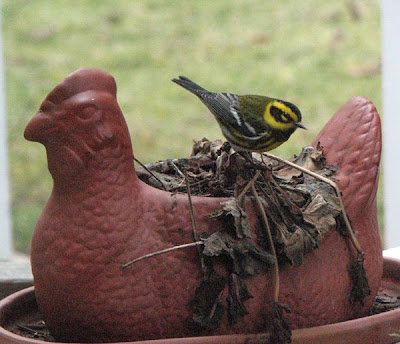 This pretty guy shows up on a regular basis. I thought he was a finch, but in checking my Western Birds book, I think he is, in fact, a Townsend's Warbler. I know—the slimy, dead geranium in the pot looks like hell. Victim of a hard winter. 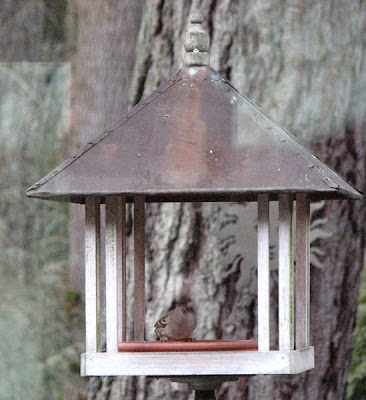 I think this is a junco at the feeder. I built this bird feeder several years ago and went to some effort to find sheet copper for the roof. I envisioned it oxidizing to a nice coppery green, but it hasn't. Anyone know how to encourage that? 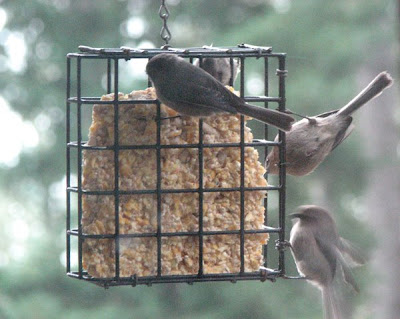 These tiny bush tits swarm the suet feeder, hanging just outside the front window. Sometimes it is so covered with little birds you can't see the feeder. Then they swoop away in a fluttery little mass.

I'm sewing something for Sofia. I had had visions of making all kinds of darling little ensembles for my grandchild, but sadly I haven't found as much time as I'd hoped. What I am making is turning out cute. I'll show you when I finish it!