Our small critique group met at my house yesterday. Big event that it was (not), it has already been covered extensively on both June and Gerrie's blogs. Deep in the February doldrums, I think any opportunity to get out of the house becomes fodder for the blogs!

I don't have a great setup for displaying art for critique. I propped one of my design boards against the fireplace and hoped that everything would be small. It wasn't. 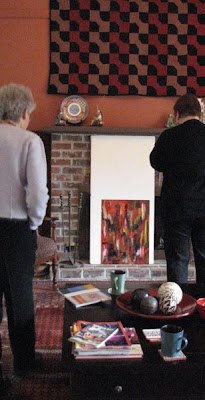 Our process is to put up one work. The artist does not explain, nor even comment until the rest of us have had our say. Usually we contemplate, look up close, back away and look. Mary and Gerrie, here, are taking in June's painting. Gerrie emerged from deep concentration long enough to mutter, "are you taking a picture of my butt?" Sometimes, as in this case, we wonder if the piece works if you turn it upside down—or on its side. Hey, maybe it's even better that way!

Finally the artist has her turn to respond, explain, talk about what she was going for. 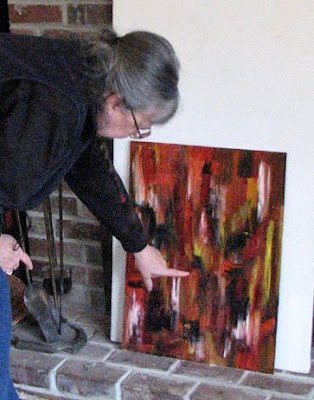 Gerrie brought her 12 x 12 "chair" piece. We had lots of ideas of other things she could have done and speculated how "this would have worked," or "what if . . .", but in the final analysis, it is beautiful just as it is. 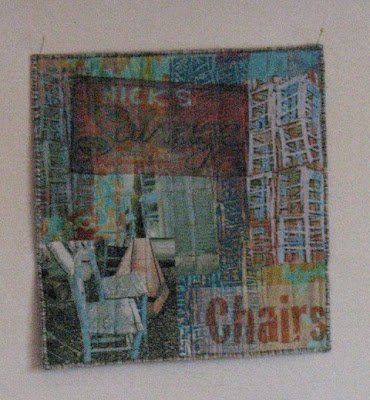 Mary's work is always fun to see and even more fun to try to figure out before she gets her chance to explain what was on her mind. There is always a story, an idea and the clues are usually in the fabrics. Often her work has a political message. 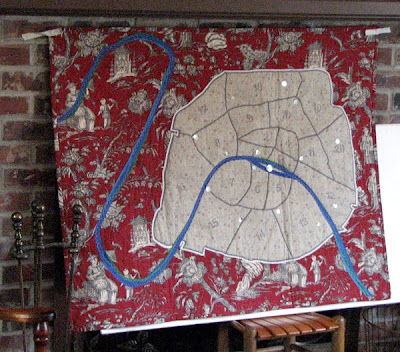 This piece, the one that was too large for my design board, had no political implications and we all decided it was a map of some kind, with either a road or a river running through it. Bingo! It is Paris, made from French fabrics, purchased in Paris. The buttons represent famous places in Paris, the one on the island in the Seine is Notre Dame Cathedral. (I had said maybe it was the Rose Garden in the center of Portland's Ladd's Addition neighborhood—close?) 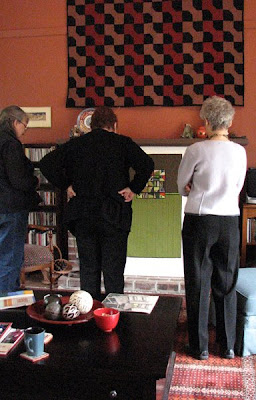 June pushes us to think and asks provocative questions. She keeps us on the straight and narrow and doesn't allow us to veer from design analysis with technique comments or speculation ("do you think she glued those sequins on, or sewed them?") Here, she wonders aloud if my piece would "speak" to the other one if they were hung side by side. 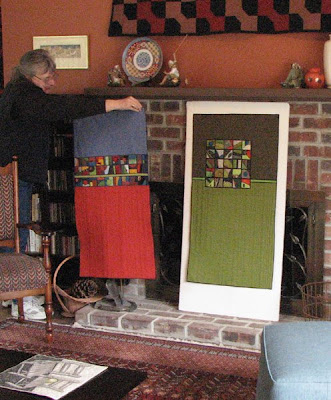 It's a good exercise and good people. I find I get more out of a critique if I can show something in progress. I don't always agree with every idea that is presented, but I usually get something useful from the discussion. It is nice to be able to go back and work on the piece with that fresh perspective. We try to offer honest comments, without being brutal. We probably err on the side of being too nice, but we all know that. When the critique is finished we go out to lunch and leave our inner art critics behind.
Posted by Terry Grant at 10:33 AM