When my kids were kids, we would often travel north from Ashland, Oregon where we lived, on I-5 to Eugene, or Portland or even Seattle. About 40 miles north of Ashland we would pass the small city of Grants Pass. Being Grants, ourselves, the kids once asked why the town was called Grants Pass. Ray responded that if you looked carefully, as we drove by, you could see that people had come out of their houses and directed their attention to the passing freeway, in order to see the Grants pass. Har, har, — get it? We were the "Grants" that were "pass"ing... OK, I know, very poor joke and the kids groaned unappreciatively. But the badness of the joke, then became the joke and it was repeated every time we drove past Grants Pass. And still is. And we still all groan.

According to the official web site of the city the name really came about this way:

How We Got Our Name
Grants Pass served as a stagecoach stop in the 1860's and became a rail head with the completion of the Oregon-California Railroad (now Southern Pacific) in 1884. The name was selected to honor General U.S. Grant's success at Vicksburg and the post office was established in 1865. Until after the turn of the century our name still retained the original spelling of Grant's Pass, using an apostrophe.

But now, I learn, Grants Pass has achieved another distinction. A collectible plaid shirt has been created by the J. Crew Company and named the Grants Pass Plaid shirt. 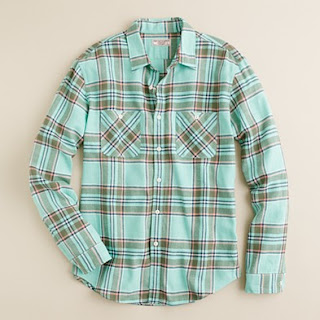 It costs $100 and is described on the J. Crew web site thusly:


A new collection of old favorites, built using the foundations of traditional workwear, vintage military uniforms and classic outdoor gear as our guide. Named for Grants Pass, Oregon aka the coolest town you've never heard of, this plaid is based on a vintage shirt one of our designers picked up at a Pacific Northwest yard sale. Back east, our team reinterpreted the hardy, worn-to-the-mill flannel and gave it a modern color update, creating a limited edition original with all-American roots. Point collar. Camp pockets. A Collector's Item. Import. Machine wash.

I wonder why this makes me laugh so hard. Grants Pass is a charming little town, but hardly "the coolest town you've never heard of" and really, no one there would pay $100 for a plaid flannel shirt.
Posted by Terry Grant at 11:31 AM