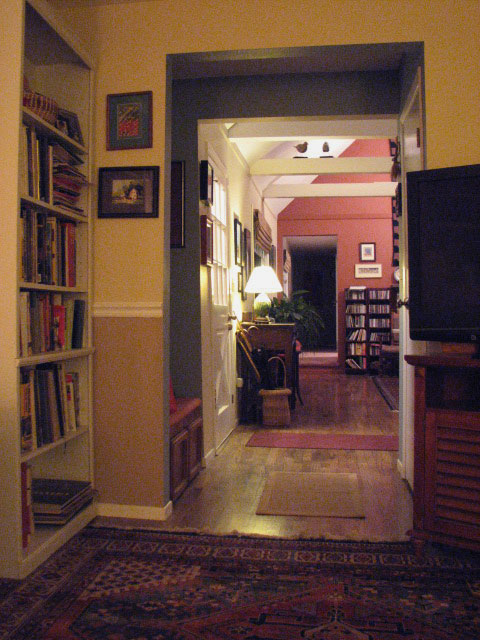 In the evenings I sit and this is my view, TV on the right. Tonight out of nowhere Ray said, "I love our house." And  I agreed. Not for its size. Not, certainly, for its luxuriousness. It is definitely a work in progress. And it occurred to me that this is probably our last house. I hope to be here a long time. But still, a sobering thought. The journey of my life has led me here. It makes me think I might have considered things more carefully, but then I—we—(I include Ray in this) have always been a bit impulsive. We never planned to be here, in this spot, but I'm not sure there is anywhere else I would rather be. Today's sunshine has made things pretty much right in my world.

I have known for several weeks that there was something wrong with my sewing machine, but I have pushed it through, babying it and avoiding stressing it too much. Yesterday it lurched into a shuddering spasm, swallowed a big gulp of thread and then vomited it out. I cleaned it. I talked soothingly, but it continued to gulp thread instead of stitching, so it went off to the repair shop today. 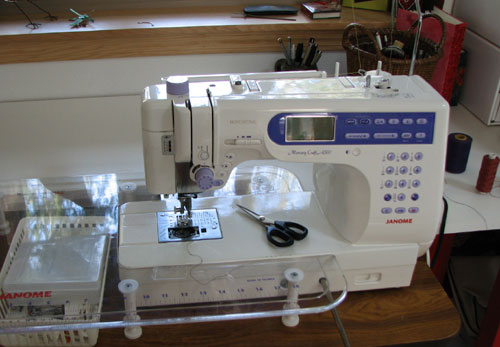 I think of it as my "new" machine, though it has probably been ten years ago that I brought it home. I hope it can be repaired. I think it can, but they say it will be at least three weeks before the repairman, who is currently doing good works in New Mexico (repairing Hopi sewing machines?? I don't know...), will be back and make his way through the backlog to my machine. Meanwhile, I pulled out my old machine (which was my "new" machine for the twenty years prior to the purchase of the new "new" machine) and it seems to run OK. I will reacquaint myself with it. It is like changing cars. Everything is in the wrong place. Deadlines are looming, but this is a test. If all else fails there is the treadle. There is still money in the drawer.
Posted by Terry Grant at 11:23 PM