I am ready to start on something new. High Fiber Diet, the Art Quilt Group I belong to is having a show with the theme of the four elements: earth, air, water and fire. I want to make something for this show and as I think of these four elements it is fire that always seems the odd guy out to me, at least visually. The other three all suggest nature themes. Fire seems like it would be very harsh mixed with earthy, natural subjects and colors, though it is also a force of nature. So my initial resistance to the idea of fire has been wiggling itself around in my brain. I am trying to think of how to depict fire in a way that is not screaming red and orange. One of my first thoughts was a memory of visiting Yellowstone Park in the winter several years after massive wild fires destroyed thousands of acres of forest. We skied through large tracts of burned forest like this, except in winter it seemed even more stark, with the snow on the ground. While it would not address fire, it would be about the aftermath of fire.

Then I thought about campfires. How much I love campfires. I have such wonderful memories of campfires at the Girl Scout camp where I went for years, as a camper, and then worked at as a counselor. There is something hypnotic and magical about sitting around a blazing fire and listening to the hiss and crackle and watching those small explosions that send showers of sparks into the night sky to mingle with the stars. So difficult, I think, to capture that feeling and that sense of deep, rich warmth and light against a velvety dark sky.

I looked at photos. Google images is always a wealth of inspiration. 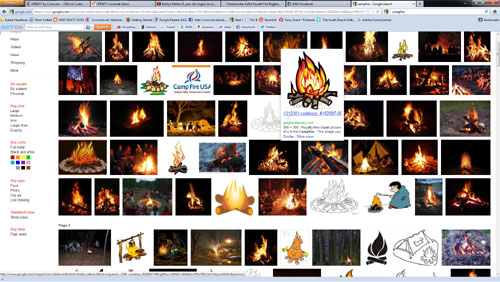 I started work on some sketches. So hard to draw fire without it looking like a cartoon. I need to think of an abstracted way to present the impression of fire. Not sure I can do it satisfactorily. I think I need to pull some fabrics and make some little samples. Black and white doesn't cut it. 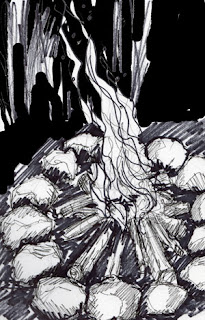 Still, these little sketches do help me work out composition and one of the coolest tools is Photoshop. Just by scanning my drawing and using some of the distortion tools in Photoshop I think I am already honing in on a better composition. 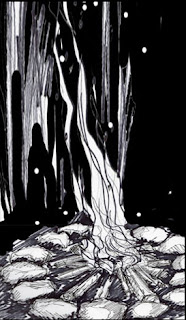 Lots of work left to do before I even decide if this is a workable idea, but it is growing on me.
Posted by Terry Grant at 12:03 AM